With the alarming increase in Covid-19 cases and exposure sites throughout Victoria, it is absolutely crucial that you have considered the most effective and efficient process in managing this situation if your business is classified as an exposure site. Becoming an exposure site can be a stressful time for your business, so we have provided some key suggestions to assist you if you encounter this issue.

Firstly, you must communicate to your employees, clients, and suppliers that you have been classified a Tier 1 exposure site. Effective communication is vital as it allows your key contacts associated with your business to immediately be aware of your circumstances and take the necessary precautions for themselves. We recommend that you pre-prepare an email that can be sent out to each of these three groups, so that in the chance you become an exposure site – you will be able to act immediately to inform your company’s stakeholders. Below is our advised structure:

Once you have carried out your necessary communication measures, it is necessary to have the office disinfected. We advise you to approach commercial cleaners who can complete the ‘deep clean’ and completely disinfect your office. There is a rebate for this process and the following requirements determine whether your business is eligible.

Further you must satisfy the following:

The rebate will provide you with an amount up to 80% of the decontamination costs capped at $10,000 excluding GST per worksite. Additionally, you will need the following evidence to qualify for the rebate.

Evidence to Provide for the Rebate:

The link below leads you to the online application attaching all the requested documentation.

The WGT is a new state-based tax that is proposed to commence in Victoria from 1 July 2023. WGT can accrue to owners of land when their land value increases by more than $100,000 due to rezoning (other than excluded rezoning). The maximum tax payable is 50% of the uplift.

How is WGT Calculated?
The WGT will be calculated using the Capital Improved Value of the land as provided by the Valuer-General Victoria. The difference between the pre-rezoning value and the post-rezoning value of the land is used to determine the value elevation of the land. The WGT is then calculated using this value elevation. Valuations are generally dated 1st January (however the Commissioner can request a supplementary valuation from the Valuer-General for WGT purposes)

When is it payable?

Can You Defer the Payment of WGT?

If it is before the due date of the notice of assessment, the landowner will have the ability to elect for deferral payment of the WGT up to 100%. However, please keep in mind the deferral is only until:

The deferral payment will exist until one of the above circumstances occurs.

An example scenario outlined by the Victorian Government has been provided below to highlight how the tax will operate.

‘Company ABC owns industrial land on the outskirts of a regional town which was purchased for $250,000 in 2015. Over time the town has grown and in anticipation of future residential developments the value of land around the town increases.

If you have any questions about the WGT and its process, please reach out to your knp adviser for further information.

Editor: The ATO is currently reviewing certain arrangements where Australian taxpayers seek to disguise undeclared foreign income as a gift or loan.

Genuine gifts or loans received from related overseas entities (including family members and friends) are sometimes used to fund businesses or to acquire income producing assets.

In this context, a genuine gift or loan is one where:

Having good contemporaneous record keeping practices is desirable in case the ATO seeks to verify whether an amount is a genuine gift or loan.

The ATO has published detailed information to help taxpayers properly document genuine gifts or loans received from related overseas entities that are used for income purposes.

The information can be accessed from the ATO website by searching for ‘Gifts or loan from related overseas entities’.

The ATO is providing additional support to taxpayers having difficulty meeting their tax and superannuation guarantee charge obligations for employees because of COVID-19.

Editor: If you are struggling with your tax or super obligations, we can assist with identifying your options and apply to the ATO on your behalf.

The Paid Parental Leave (‘PPL’) scheme has been amended to enable expectant parents whose work has been affected by COVID-19 lockdowns to access Parental Leave Pay or Dad and Partner Pay under the scheme.

Many people who would otherwise have qualified for PPL, may no longer meet the ‘work test’ condition to be eligible for payment because of continued lockdowns across much of Australia.

For example, this could apply to a person who has been stood down, had their hours of work reduced or ceased work entirely as a result of a lockdown.

The changes to the PPL ensure that the period a person receives an Australian Government COVID-19 payment or the COVID-19 Disaster Payment (that is, because their work has been impacted by lockdowns) counts towards the work test, so that they may still receive Parental Leave Pay or Dad and Partner Pay.

We have come to the end of another fantastic Movember from our very own knp team. The 2021 knp Mo-Lutions team has once again excelled in their contribution to this important foundation.

As it stands, we have raised $3,077, surpassing our target for the month. Every contribution has helped the foundation in their endeavours to improve men's lives through projects focused on prostate cancer, testicular cancer, mental health and suicide prevention.

Take a look at the brilliant Mo’s our team grew across the 30 days below! A special mention should also be made to Zoe Austen who ran 60 kilometres throughout the month in her ‘Move for Movember’ – another tremendous way to contribute to this cause.

It’s never too late to make a contribution. If you would like to donate, please follow the link below! 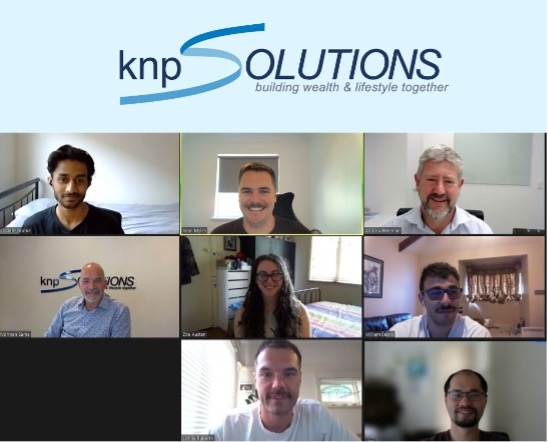